Can You Bring It: Bill T. Jones and D-Man in the Waters is a feature documentary celebrating the history of D-Man in the Waters, a tour de force ballet from Bill T. Jones, co-founder of the venerable Bill T. Jones/Arnie Zane Company which formed in 1982. Jones choreographed the piece following the deaths of company co-founder Arnie Zane and company member Demian “D-Man” Acquavella, who both passed during the height of the AIDS crisis. The 2020 film is directed by former Jones/Zane company member Rosaynd LaBlanc. Tickets are available through the Chelsea Theater website.

Woods Valdés was a member and rehearsal director with the company from 1989 through 1994. She will introduce the film together with Janet Lily, former company member and current director of the School of Dance at the University of North Carolina Greensboro.

After graduating from Adelphi University in New York, Woods Valdés was focused on teaching dance to young people. “That really gave me a sense of mission and self-worth,” she said. At the same time, she held her share of waitressing and hosting jobs, while making time to work on solo choreography for a small showcase—that had a small audience—in Lower Manhattan. 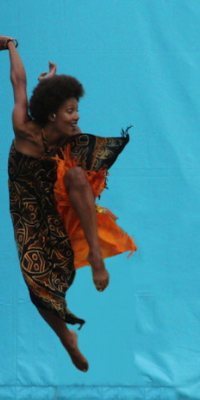 Also performing at the showcase was Arthur Aviles, a Jones/Zane company member. While Jones showed up to support Aviles and left shortly after, Aviles stayed for the rest of the showcase and caught her solo—which was next to last in the lineup. So impressed by what he saw, he called Jones that night, “on a rotary phone,” Woods Valdés adds. “Bill told him to invite me to a rehearsal.”

She came into the company with a point of view and experiences, “and that all exploded by the time I left,” Woods Valdés says. Dance has always been a gateway to larger themes for her, and Jones’ avant-garde works afforded the dancers an ability to express and confront important issues: racism, religion, homophobia, and AIDS.

“Bill liked dancers who brought something to the process and offered some resistance,” she says. And when I joined, it was right after Arnie’s untimely passing. I was one of three dancers in the first wave without Arnie. Absence was the first pieced I danced—I inherited that piece and the spirit and love for Arnie’s work, but it came with a sad nostalgia for his absence.”

Woods Valdés learned many things during her time with the company, including independence. So, when she decided it was her time to leave Jones/Zane, she had no desire to work with another company. “That was the company I was meant to be in.”

In 2020, Woods Valdés was one of 44 current and former company members invited to participate in Continuous Replay: Come Together, a virtual performance and fundraiser in support of the Black Lives Matter movement.

Dancers on four continents and representing four decades filmed themselves in isolation, due to COVID restrictions, performing the iconic work of the same name that was first choreographed as a solo by Zane in 1977. Jones reworked it into a full company piece three years after Zane’s 1988 death.

Each dancer’s filmed performance was then edited by Jones’ associate director Janet Wong, who joined them together into one virtual piece that was live-streamed to a global audience that November.

Participants had the freedom to choose where to film their performances. Woods Valdés danced knee-deep in the Eno River, which flows through the land where she and her husband share a home. “While it marks my territory and love for the North Carolina landscape, I also chose to dance in the river as a way to acknowledge my ancestors who were enslaved, and buried, in the Dulatown community in Lenoir, North Carolina,” she explains.

For Woods Valdés, Continuous Replay has always had both an individual and collective dynamic, something she was well aware of while she filmed her performance. “Even alone in the river, I knew I was still part of something.”

She has restaged the piece three times, including most recently for her “Modern Dance Repertory” course this past spring. Woods Valdés chose the piece because of its heartfelt and emotional qualities, and while she had the freedom to reshape the choreography around current issues, it still held many open variables. The class culminated in a taped performance that was included in the Duke Arts Student Showcase in April 2021.

No matter where her career takes her, or how many years pass, she knows there will always be a strong connection with Jones/Zane, the choreography, the dancers—and especially with Jones.

“Bill has been a mentor, and we share a profound love between us,” she says. “Once affiliated with Bill and the company, you have a bond—that’s just how Bill is. We’ve been circling each other’s spheres for nearly 30 years.”